The centrality of New York’s Greenwich Village in the folk music revival—aka “the great folk scare”—of the 1950s and ’60s cannot be denied. But the Village back East was not the only epicenter of passion for traditional and old-time acoustic music in the United States, as amply evidenced in a new two-CD set of recordings captured at festivals, concerts, music workshops, and house parties in Northern and Central California. The environs of NYC’s Bleecker and MacDougal streets gave us such beloved icons as Dave Van Ronk and Fred Neil, and such future celebrities as Joan Baez, Bob Dylan, and Peter, Paul & Mary. But “The Village Out West”—a California sprawl that ranged from Berkeley (home to the influential Berkeley Folk Music Festival, 1958–1971) to Fresno—was (and still is) a hotbed of vernacular music in its own right, appreciation of which is deepened in this 51-track sampler from the lost tapes of civil engineer, folk music aficionado, and amateur audio engineer Alan Oakes.

Something like a minor league Alan Lomax or Harry Smith, Oakes, who died in 2019, would have remained obscure and unsung had not his widow, Marnie, contacted Deborah Robins, the folk-singing partner of Larry Hanks. Robins took the tapes to Oakland, California, sound engineer Mark “Wally” McClellan for digitization, and to musician/writer/radio producer Henry H. Sapoznik for cataloging. Robins, Sapoznik, and Jeff Place co-produced the set, which includes illuminating essays, musician biographies, poster reproductions, and historical photographs.

Apparently recorded mostly from 1965 to 1971 (not every track is identified with a date and venue), the performances bounce around genres and idioms: bluegrass, gospel, old-time folk and string-band music, Piedmont and Delta blues, Celtic ballads, Woody Guthrie tunes. Despite the ad hoc recording setups, the sound is stunningly good, with minimal amounts of ambient and/or audience noise, a testament to Oakes’ mic placement and McClellan’s restoration skills. CD 1 opens with a version of “Beaumont Rag” performed by Hank Bradley on fiddle, Doc Watson on guitar, and Rick Shubb (of Shubb capos fame) on banjo, and CD 2 closes with the same trio playing “O, Them Golden Slippers.” In between, we are treated to a survey of a scene that makes us both envious of those who partook firsthand and grateful to Oakes for obsessively hauling his tape recorder into clubs such as the Jabberwock in Berkeley and the Old Gallery in Fresno, as well as various living rooms, including his own.

Every listener will zero in on favorite tracks and discoveries; perhaps unaccompanied vocalist LaWanda Ultan, solo banjoists Gene Bluestein or Jerry Houck, or autoharpist-singer Kilby Snow. The singing duos of Kathy & Carol, Hanks with Spoelstra or Perkins, Caroline and Sandy Paton, and Sandy and Jeanie Darlington are riveting, and the several appearances of Sweet’s Mill Mountain Boys and the Bradley-Shubb-Watson trio are especially energized. The combined senses of intimacy and exuberance throughout make for listening as delightful as it is enlightening.

Here are three varied selections from the box: 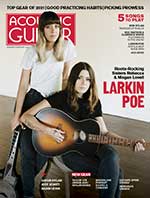 This article originally appeared in the January/February 2022 issue of Acoustic Guitar magazine.