At the onset of the coronavirus pandemic in the spring of 2020, John Pizzarelli, one of the busiest guitarists in the jazz world, found himself with all of his gigs cancelled for the undetermined future—and without a whole lot to do. At the same time, he endured personal tragedy as he lost his father, the legendary jazz and studio guitarist Bucky Pizzarelli, and his mother, Ruth Pizzarelli, within days of each other, due to complications from the virus.

Having decamped from his New York apartment to his lakeside cabin an hour north of the city, Pizzarelli poured his grief into practicing for hours a day on his seven-string classical. He had long been a fan of jazz guitarist Pat Metheny, and started arranging some of Metheny’s works for solo guitar, which he then posted in informal YouTube videos from the cabin.

Pizzarelli is best known for his smooth vocals and sprightly and sophisticated guitar work in small ensemble settings; on recent albums he has explored the music of Johnny Mercer, Paul McCartney, and Frank Sinatra and Antônio Carlos Jobim. He had never recorded a solo guitar album until Better Days Ahead (reviewed in this issue), which collects the evocative Metheny arrangements he made while sheltering in place.

I checked in with Pizzarelli last summer, just as he was about to perform selections from the album for the reopening of NYC’s Blue Note Jazz Club. Our conversation has been edited and condensed for length and clarity.

It came as a bit of a surprise to see your YouTube videos of Pat Metheny arrangements when you uploaded them in 2020. What is your history with Metheny’s music?

A lot of people were surprised because of the nature of what I do normally as a guitar player. I think I first saw Pat on a PBS television show [Austin City Limits] when I was 16 or 17, at a party in a friend of a friend’s basement. I’ll always remember watching him play the melody to “Phase Dance” on an acoustic guitar, and swinging around a Gibson ES-175 that was strapped on his back to play the solo.

I’ve been a big fan ever since. His solo guitar work—“Cherish,” “Alfie,” “Rainy Days and Mondays,” and all that—is so smart. I just have so much respect for Pat. He’s really hit it on all levels, not just in the guitar playing, but in the composing and the arranging—and in the way he structured the band and set all those things up with [keyboardist] Lyle [Mays] and everything, which is just so magical. I’ve always been very moved by all of it.

Had you played Metheny’s music before the pandemic?

I played “(It’s Just) Talk” with my group in the ’80s, and we did “Last Train Home” on my Tuesday night gigs in Mahwah, New Jersey. I played “James” for the longest time—my wife really liked it when I played it in the house—but it wasn’t until the pandemic that I really sat down with it to get the harmony right. Also, with my parents’ passing, it was just a way to cope with all of it, and music was just literally coming right out of me for some reason.

So I worked on “Better Days Ahead,” and then a buddy of mine said, “Well, what about ‘Last Train Home’?” Rick Hayden, who co-produced the record, said, “You know, ‘Antonia’ is a great tune. You should look at that.” I started posting videos of the arrangements on Facebook, and after a few postings, Rick said, “Okay, you’re going to stop now. Don’t give this thing away—it’s a really great idea for an album.”

All of these little pieces of advice that I had gotten from [my father] throughout my life were coming into play in putting this stuff together.

I had been in touch with Pat, and he sent me his book of lead sheets that he gives out when he plays with new musicians. That was really amazing and totally unexpected. There was a chord on “Last Train Home” that I was playing one way, and it just didn’t sound right. Then when I got the music, I was able to go, “Oh, that’s the correct voicing.” It was really great to know that I was getting the right voicings and melodies and really go for it.

Once you had all of the information, what was your arranging process like?

I knew when I wanted to learn “Farmer’s Trust” or “Letter From Home” that the arrangements would be complete pieces just the way they were written, and I wasn’t going to blow any single-note stuff. The idea was to approach
any of the improvisations in a chordal style, sort of [George] Van Eps-ian or Bucky Pizzarelli–like. So that was the challenge: coming up with some nice chord solos while trying to make it a little more unique.

The other part was, I could hear my father in my head saying, “Take your time there and enjoy that part of the song. That’s a great melody there, and you can really milk it.” All of these little pieces of advice that I had gotten from him throughout my life were coming into play in putting this stuff together.

What guitar did you use on the album—and why did you choose it?

I used the guitar that I had learned the pieces on. It’s my Bill Moll seven-string classical, which I also played on my Sinatra-Jobim bossa nova record a few years ago. I’ve had the guitar for 14 years. It’s a very comfortable instrument to play, and I felt like the music really lent itself to the Moll.

Was it a custom build?

Yeah, Bill made me an archtop at the beginning of the century. I had him do the classical, too, and I said, “I want it to look like João Gilberto’s guitar, with that nice dark orange color on the top, but with the neck connecting at the 14th fret.” I put an RMC pickup on it a couple of years ago, and that made it sound really great and reliable live. Also, I’ve been using Aquila Alchemia strings, and a Hannabach low A, which Rick recommended. These strings have changed the whole ball game for that guitar—they make it speak really well.

You recorded the album in your cabin—what was that like?

My buddy Brian Saunders had sent me his iRig, so that I could plug the guitar [via the RMC] right into my iPad. I didn’t have an extra jack for a microphone, but it worked out well no matter what the people around me were doing. Sometimes my daughter would come in the cabin with her boyfriend or something, and it wasn’t going to ruin a take. The pickup was very clean and it worked out pretty well.

Basically, I would record each piece as best I could and then send it off to Rick in Edwardsville, Illinois. He would shine it up, and add reverb and stuff. I really liked the idea of the record not having a lot of air to it but still having presence. So we went with that sound and I was really pleased with it.

Yes, it’s not just beautiful but it shows how diverse the Moll classical sounds, almost like an archtop at certain points.

In a review or interview, one guy said it sounded like I was using a bunch of different guitars. And there are moments like “April Wind/Phase Dance” that are very nail-y, sounding like a harp. It was just the way that certain things laid on the guitar. Sometimes it sounded a little brighter, or more choppy, but it was just one guitar. I never even changed the strings; I didn’t want to screw with the sound, and the guitar was staying fairly well in tune.

What software did you use on the iPad recording?

I used GarageBand. The funny part was, I had to get my iPhone and do a FaceTime session with Rick to teach me how to use GarageBand. I call him MacGyver because anytime I have a technical question, he has an answer: “What you should do is get a cotton swab and a wire and a light bulb and hook it all together.” [Laughs.]

I would do seven or eight takes, and then I’d find the one I liked best. I played some of the rhythmic things to a click track, because I tend to rush. I wanted them all to be even, because I tend to speed up. Using the click felt natural, like I was playing with a drummer; it kept things nice and even, and I was really pleased with that.

What have you taken away from spending so much time with Metheny’s music?

It was always a challenge. When you sit down at the beginning, you go, “How can I make this my own piece yet still have some kind of respect for what Pat wrote?” Then there are the ones that I didn’t get. I tried to play “Lone Jack” for a minute, but I couldn’t even find a vibe for it that would work on acoustic guitar as a solo piece.

But it was fun to sit there and try different keys, and go through a lot of trial and error. My father would have really loved the record. I get a little melancholy about it, because he would have thought, “Wow, you did a good job on that!” Also, there’s the idea that I made a nice little gift to my parents. It really did get me through the last year and a half in a great way. 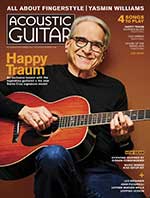 This article originally appeared in the November/December 2021 issue of Acoustic Guitar magazine.