I know John Doyle through his work with the great Irish American band Solas, but I must confess I was ignorant of his solo career (seven previous albums!), not to mention his stints playing with Mary Chapin Carpenter, Joan Baez, Linda Thompson, and others. So forgive this gushing from a relative newbie: The Path of Stones has become one of my favorite albums of Irish traditional music.

The Dublin-born Doyle has it all—a heart-melting tenor voice, emotion-filled original songs and instrumentals that have the timeless quality of the best folk music, and spectacular instrumental chops on various guitars (six-string, “five-string high guitar,” 12-string), mandolin, mandola, and bouzouki. Plus, he engineered and produced the album! All but one song feature multiple layered parts by the left-handed Doyle, sometimes contrasting strumming and deft fingerpicking, or six- and 12-string, with mandola and bouzouki added in sympathetically here and there. It’s a marvelous blend of textures, each given its own sonic space and augmented very tastefully by the occasional fiddle, cello, flute, harmonium, and bodhrán.

There is nothing in Doyle’s unfailingly poetic lyrics that would place any of these songs in modern times. Indeed, the only temporal reference is to the California Gold Rush in “Her Long Hair Flowing Down.” But evocative images of nature and the land abound, and there is much to be sung about fair ladies and lost or unrequited love. The instrumentals include spry reels, jigs, a heart-rending air, and a cool romp in 11/4 time, “Elevenses.” 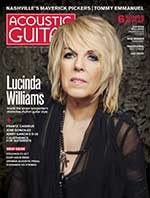 This article originally appeared in the September/October 2021 issue of Acoustic Guitar magazine.