In this guitar lesson, Alan Barnosky explains the importance of fiddle tunes in bluegrass and flatpicking guitar repertoire. An excellent example of this phenomenon can be seen in the version of the traditional song “Cattle in the Cane” that Tony Rice recorded as a duet with his brother Wyatt Rice for his classic album Church Street Blues (1983). “Cattle in the Cane” serves as not just a good introduction to fiddle tunes, but to flatpicking in general, as it is fairly straightforward and covers the hallmarks of the style—brisk single-note lines played in both open position and up the neck, open strings used for transitions, and more.

The tune has a two-part form—a 16-bar A section in the key of A major, with the flatted seventh (G) lending a Mixolydian sound, and a B section of the same length, in the parallel key of A minor. It would be best to learn the transcription phrase by phrase and section by section, focusing on your picking hand while striving for a big, beautiful sound from the melody. Rice was known for his efficient and idiosyncratic use of pick strokes, but you could play the tune with alternate picking throughout. Go with what feels most natural, and make sure to be consistent.

In terms of the fretting hand, the fingerings should be fairly intuitive—in the opening melody, for instance, play the second-fret notes with your second finger and the third-fret notes with your third. The Am chord at the top of bars 11 and 15 is a bit of an uncommon voicing, best played with the first finger on the second-fret E and the fourth finger barring the top three strings at the fifth fret. If this shape feels awkward, try using another finger for the barre, and eliminating the E.

Speaking of chords, in the ending (bars 55–60) Rice plays a harmonically sophisticated, almost jazzy passage with triads in A minor over an open-A pedal, winding down on a bright and unexpected Aadd9. His curiosity about and incorporation of sounds outside of bluegrass are a big part of what made Rice such a flatpicking force. 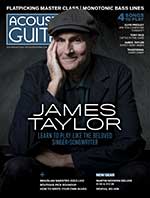 This article originally appeared in the July/August 2022 issue of Acoustic Guitar magazine.