In the pantheon of classical guitar greats, Australia-born John Williams stands as a most imposing figure. For decades he has been the archetype for recitalists of the post-Segovia era. His singular technical abilities and thoroughgoing approach to the music he plays have set very high standards for those seeking to follow him. His copious discography contains enduring renditions of the monuments of the core repertoire and forays into musical territory few other classical guitarists have trod. History views Andrés Segovia as the guitar virtuoso spanning the 19th- and 20th-century traditions. In all likelihood, Williams will be considered the pathfinder leading the classical guitar from the 20th into the 21st century.

I spoke with Williams during his recent trip to the States for some advance promotion of his latest Sony album, The Guitarist. The stunning new disc underscores Williams’ passion for finding great new material in out-of-the-way sources. On it, Williams combines music from many places and times, putting songs of medieval Italy alongside newer entries shaped by contemporary culture in Australia, Turkey, Greece, and England, where Williams partly grew up and currently lives. Williams’ absolute mastery of the instrument, big-picture approach to music interpretation, and familiarity with the far-flung periods and places from which this music sprang make these disparate selections coalesce very naturally.

In conversation Williams revealed himself to be gregarious, unpretentious, and deep-thinking. Not surprisingly, 40 years in the field have only fanned the flames of his passion for his profession, guitars, and music as a whole.

In 1958, at 17, Williams made his debut in London’s Wigmore Hall and subsequently launched an extraordinary recording career. By now, he is not sure himself exactly how many albums he has released, but he estimates the number to be between 80 and 90. Most have been on the CBS label (now Sony Classical).

Williams’ recorded output includes a staggering portion of the solo, chamber, concerto, and duo guitar repertoire from the Renaissance through the 20th century. He has also moved in circles well outside the classical realm, including a five-year stint recording and touring with the rock/classical band Sky in the late ’70s and a pair of records and several appearances with English saxophonist John Dankworth and jazz vocalist Cleo Laine. Williams’ fretwork has also graced numerous movie soundtracks. From Stanley Myers’ score for the 1978 Vietnam war drama The Deer Hunter, Williams retained a musical souvenir: the melancholic “Cavatina,” still a mainstay in his repertoire. Other side trips away from solo recitals have included three albums with fellow classical guitarist Julian Bream and group efforts like John Williams and Friends (exploring world folk music) and the contemporary music ensemble Attacca.

On his new record, Williams made a conscious move away from the sounds of Classical- and Romantic-era guitar repertoire and chose pieces leaning toward Eastern Mediterranean and medieval sounds. The disc features “Three Epitafios” by Greek songwriter Mikis Theodorakis; Carlo Domeniconi’s Eastern-influenced suite “Koyunbaba”; “Gymnopedie No. 3” and “Gnossiennes Nos. 1 and 2,” by French anti-Romantic Erik Satie; three anonymous medieval melodies; and a multi­movement piece by Australian Phillip Houghton. The album’s most unexpected treat is “Aeolian Suite,” a work penned by Williams himself for guitar and orchestra.

During our conversation, Williams touched several times upon his strong belief that rhythm is the basis of music and that a steady rhythmic pulse frees rather than restrains a performer’s expression. He took a surprisingly “unclassical” approach to his suite in the studio by opting to prerecord his guitar part to a click track and then overdub the orchestra.

Williams keeps a very open mind when choosing music for a new album or tour. “I don’t go in search of new music or new masterpieces,” he said. “I don’t have that view of guitar music. My attitude is that interesting music is written as a result of musical activity, communication, and life in general. This applies to all music.

“For the past 20 to 30 years, the influence of jazz, blues, and popular music, and the influence of flamenco, traditional ethnic, and world music has made things different than they were before. So I don’t feel it is a necessity to be looking to extend the guitar’s repertoire by having so-called ‘important’ new pieces written for it. I think it is great when they are written, but for me, it is not an obsession.

“I don’t want to be misunderstood on this point. Some great pieces have been commissioned from composers like Benjamin Britten, Peter Sculthorpe, Leo Brouwer, and others, but I don’t think that is the only thing happening in guitar music. Because of the universality of its sound, the classical guitar links with plucked-string and percussion instruments from Africa, Eastern Europe, and the Far East. There are great opportunities to be a part of many different kinds of music. I find that as interesting as anything else that has happened.”

From time to time, Williams would take out his guitar to make a musical point for me. His natural, effortless technique and beautiful tone prompted questions about his formative years as a guitarist. He attributes his facility to the excellent tutelage he received at an early age from his father. Few realize that he had only a handful of classes with Segovia. Many people believe that the maestro was pivotal in Williams’ development. He strenuously denies that notion. “As many may know by now, I am critical of the legacy of Segovia’s teaching,” said Williams. “He was fantastic to me and a great inspiration to a whole generation, but he was also a very difficult human being, and he behaved, in personal terms, abominably toward me and my father. I have to say, with the benefit of hindsight, that I don’t think he was a good teacher.

“I think I learned the most about guitar from my father. He was a great teacher. He taught me from when I was four or five to 12 or 13. He wanted me to make that beautiful Segovia sound and spent a lot of time on hand position and being relaxed. He also wanted no unnecessary hand movement. He taught about control of tone color and that technique is not about speed, but is for control of dynamics.

“I continue to learn about music from other musicians: violinists, pianists, and other contemporaries. That is where I learned music, not from Segovia. My father was very strict with me, perhaps too strict, but I am really happy with the results.”

I told Williams that in comparing his recent recordings to his earlier ones, I felt his playing had become more expressive as the years passed. “A number of people have said that to me,” he replied. “There is a change, but it is not deliberate. I think that my playing has widened out in general, but rhythmically I have become much more emphatic. So my playing has not become more expressive in the sense that it is less rhythmic. I have always felt rhythmic pulse whether the piece is fast or slow. The idea of the rhythm being subservient to a rubato doesn’t appeal to me. I feel rubato, expressive, improvisational playing, happens above the beat.

“The Segovia gesture—extra vibrato and dwelling on a note or chord at a cadence—is not musical freedom. There has been a tendency among guitar players to think that doing these things for their own sake quite apart from the context of a piece of music as a whole is in some way expressive. I view them as simply mannerisms—maybe lovely ones—but just mannerisms. Freedom happens above the pulse.” Williams added that after he started playing guitars by Australian luthier Greg Smallman, he felt the instrument gave him more expressive resources:

“The reason for the lattice bracing, very lightweight top, and heavy construction elsewhere is to produce a less percussive sound, even when you play loud. The top is less stiff and springy than a traditional Spanish guitar’s, which has a spruce top and fan struts. With a traditional guitar, the stronger you pluck, the more you hear the fundamental percussive attack. Smallman’s tops work more like a drum skin—the entire top is working from the word go. Instead of the stiffer places over the bridge sounding first and then the fan strutting working next, the whole top is working. On a fan-strutted guitar, not much energy gets out to the edges of the top. Smallman’s idea is to get as much energy as possible out there. The Smallman gives a greater variety in tone colors. There is not simply a difference between playing ponticello and dolce, but all of the shades in between are there.”

Williams sees a fin de siècle lyricism coming into vogue in the waning years of a century that, for better and for worse, has seen much musical innovation. He reflected on his involvement in the late-1960s avant-garde movement and how it ultimately proved to be a blind alley. “The avant-garde existed because of the enthusiasm of performing musicians, me included, who wanted to do new things just for the sake of doing them,” he said. “It is fun to rehearse for a week with a chamber group and then perform a new piece. An enormous amount of money from the BBC, new music committees, and public grants was poured into producing avant-garde concerts. [Audiences] simply didn’t go to them. A few great pieces survived from that era, and we have forgotten the rubbish. Today there is a return to lyricism, but it is not a looking back, it’s returning to a timeless, universal thing that was always there—sort of social and communal culture.”

The guitarist shared his opinions on the continuing evolution of Western music and the guitar’s place in it. “The idea that the best music is European music is having the ground cut away beneath it,” he said. “The influence of blues, jazz, American popular songs, and musicals on the vocabulary of classical music in this century has been enormous. When you look at the mix of blues and rock with traditional and folk elements, you see the development of a sort of worldwide urban culture. Add to that the influence of world music, and you’ve got an enormous sea of interest in music in general today.

“About 150 years ago, the guitar was not part of what was going on in classical music. You had a Giuliani concerto and some solos, but guitar was only part of the amateur music scene. Today, in the worldwide musical culture, across the board, guitar is right up there in the middle of it; I’m talking about the classical guitar. It is used in films, in traditional African music, folk and Celtic music, and much more. Madagascar has a whole history of classical guitar playing in their traditional music.

“Earlier in this century, you could have said that most music was either popular or classical European music. But classical composers today have been influenced by the harmonies of popular and jazz music, just as jazz itself was influenced by the harmonies in the music of Ravel and Debussy. The 20th century has seen a total change colored by this mix. In some ways, it is hard to know where we are . . . but I think that is good.” 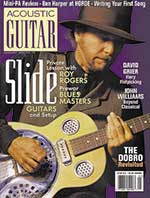 This article originally appeared in the January 1999 issue of Acoustic Guitar magazine and was reprinted in the September/October 2020 issue.