The lengthy, imaginative improvised excursions that Jerry Garcia called forth on his electric guitar inspired legions of devoted fans to hit the road with the Grateful Dead during the band’s heyday. While dissertations have been written on this work, Garcia’s acoustic side warrants consideration, too. A highly personal take on all sounds Americana, Garcia’s acoustic guitar can be heard on such Grateful Dead songs as “Uncle John’s Band” and “Ripple,” as well as in Garcia’s music outside the Dead with mandolin virtuoso David Grisman and others.

Named after the composer Jerome Kern, Jerome John Garcia was born in San Francisco in 1942 to a musical family. Garcia studied the piano as a child, but having lost most of his right middle finger in a wood-chopping accident at the age of four made playing difficult. It wasn’t until he was 15, upon hearing Chuck Berry, that he took up the electric guitar. In the early ’60s, after a brief stint in the Army, Garcia became obsessed with folk music and got into acoustic fingerpicking, then picked up a banjo and dove headlong into bluegrass for a couple of years. In 1964, however, he went back to guitar (mostly) and started the irreverent acoustic group Mother McCree’s Uptown Jug Champions with future Dead members Bob Weir and “Pigpen” McKernan (and a host of others). Those three, with the addition of drummer Bill Kreutzmann and (eventually) Phil Lesh on bass, morphed into the Warlocks, the electric bar band that preceded the Grateful Dead.

With its freewheeling approach to music-making and life in general, the Dead became the band most emblematic of the hippie era, and continued to record and tour until Garcia’s untimely death of a heart attack in 1995 at age 53. As one of the primary architects of the Dead’s music, Garcia played a pivitol role in creating the band’s uncanny synthesis of psychedelic folk, blues, country, and jazz, and his electric and acoustic guitar playing has been an influence on legions of jam band lead guitar players, from Phish’s Trey Anastasio to the String Cheese Incident’s Bill Nershi.

This lesson feature examines the trademarks of Garcia’s acoustic approach, which incorporates strumming and flatpicking in both accompaniment and lead roles, all imbued with a fair amount of improvisation. In the process, we hope you will gain an appreciation for Garcia’s contributions to American music, as well as some new ideas for your own playing.

One of Garcia’s most identifiable lead techniques features a breezily descending series of triadic arpeggios on the top two strings, as heard in the beginning of “Uncle John’s Band,” from Workingman’s Dead. In Ex. 1, a typical Garcia arpeggio lick follows four bars of a syncopated A barre chord. To play the arpeggios, which outline the chord progression A–C#m–D–E, start with your index, middle, and little fingers on the ninth, tenth, and 12th frets, respectively, shifting down to seventh, fifth, and fourth positions for the C#m, D, and E chords. As Garcia would when playing a phrase like this, let each note ring as long as possible. 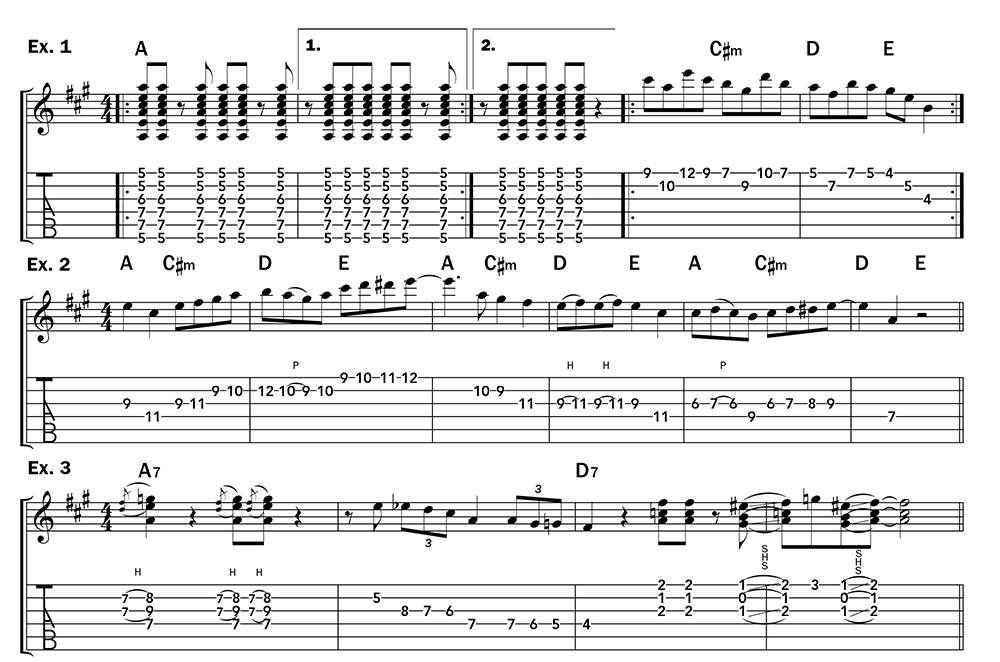 Garcia also often took a more scalar approach embellished with chromatic passing tones, as in his bright single-note solo on “Uncle John’s Band.” Ex. 2 sticks mostly to the A-major scale, with a couple of ascending chromatic passing tones in measures 2 and 5. Notice that the D# note, bridging the D and E notes, imparts a jazzy flavor to the line. Garcia tended to stay in one position for a while before moving on to another, so, when playing through this example, keep your fingers in ninth position for the first four measures, then shimmy down to sixth position for the last two bars. Also, Garcia often used articulations like hammer-ons to keep the music from sounding stiff, so to really get inside his sound, be mindful of all the slurs in this example.

In addition to arpeggios and scalar passages, like most rock guitarists Garcia often referenced the blues, heard for example, on his soulful lines behind the vocals during “Black Peter” (from Workingman’s Dead). The verse sections of “Black Peter” are based on a I–IV progression (A7–D7) in the key of A major. To play the chordal bit in measure 1 of Ex. 3, barre the seventh fret with your index finger and quickly hammer on to the E and G notes with your middle and ring fingers. In the next measure, move down to fifth position to play the triplet-based fill. Notice the use of descending chromatic passing tones, Eb and G, a Garcia trademark that lends a bit of sophistication to the lick. The move at the end of measure 3 leading into measure 4 might be a little tricky. Fret the G# and E# notes with your middle and ring fingers and slide the shape up while hammering on from the open B string to C with your index finger, making sure that all the notes of the second chord sound simultaneously—a subtle ornament that captures Garcia’s bluesy side.

COUNTRY STRUMMING & UNUSUAL HARMONIES
The country-western-influenced “Dire Wolf” (from Workingman’s Dead) features Garcia on pedal steel above a bed of strummed acoustics. A close listen to the acoustic parts reveals that different voicings are used to fill out the chords—a smart arranging strategy that Garcia and Grateful Dead co-guitarist Bob Weir often used to stay out of each other’s way. In Ex. 4, the lower part sits squarely in open position and decorates the chords with bass lines, while the upper part sticks to closed-position F-shape voicings embellished with the suspended fourth. While keeping the basic chord shape depressed, add this ornament with your little finger. When you get to the G chord, make sure you barre the top three strings with your index finger; this will allow you to efficiently play the Bb–B hammer-ons in measures 5 and 6. 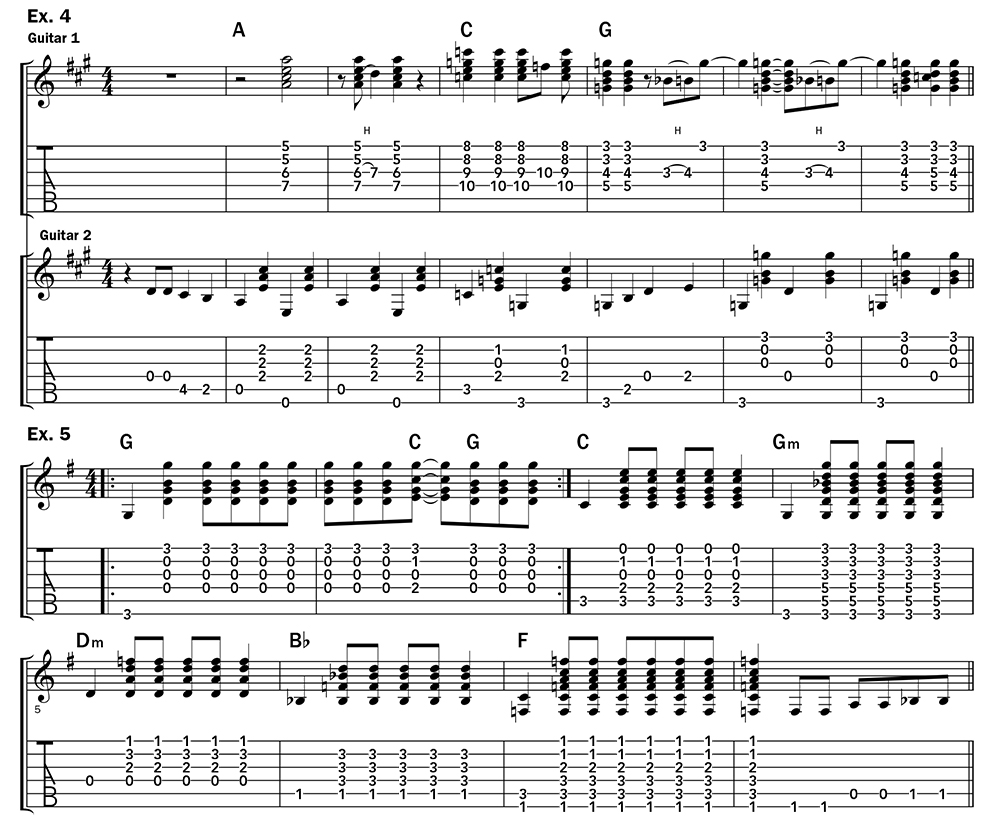 Garcia often used a basic strumming approach to create colorful music. While the acoustic right-hand pattern he played on “Box of Rain” (American Beauty) might not be all that involved, it is harmonically compelling and even a bit disorienting. The progression in the first two bars of Ex. 5 toggles between G and C chords, setting up a G-major tonality. In measure 3, the tonic, or home chord, seems to move to C, but the subsequent harmonies—Gm, Dm, Bb, and F—suggest a modulation to F major. This example may be harmonically unusual but it is straightforward to play—use up-and-down strumming throughout, and in the final measure, use assertive downstrokes to play the bass line that will lead back up to a C chord. In the first two measures, keep your ring and little fingers anchored on the sixth and first strings, respectively, and play the C chord by adding your index and middle fingers on the C and E notes.

A BLUEGRASS INFLUENCE
Garcia was not just a fine guitarist and pedal-steel player, but also a sturdy banjoist. In the early 1960s, he showed up, banjo in hand, to audition for bluegrass founding father Bill Monroe, but at the last minute lost his nerve. His banjo playing can be heard in the bluegrass band Old & in the Way, which Garcia formed in the ’70s with Peter Rowan and David Grisman, and a bluegrass influence is evident in a number of Grateful Dead tunes, in particular, “Friend of the Devil” (American Beauty), its old-time sound reinforced by Grisman’s mandolin playing.

Ex. 6 is inspired by a banjo-like guitar pattern that Garcia used as the foundation of “Friend of the Devil.” Be sure to emphasize the bass notes moving up the G-major scale and downplay the surrounding pitches.

Pick each accented note with a downstroke and the two notes that follow with a single upstroke, letting everything ring as long as possible. 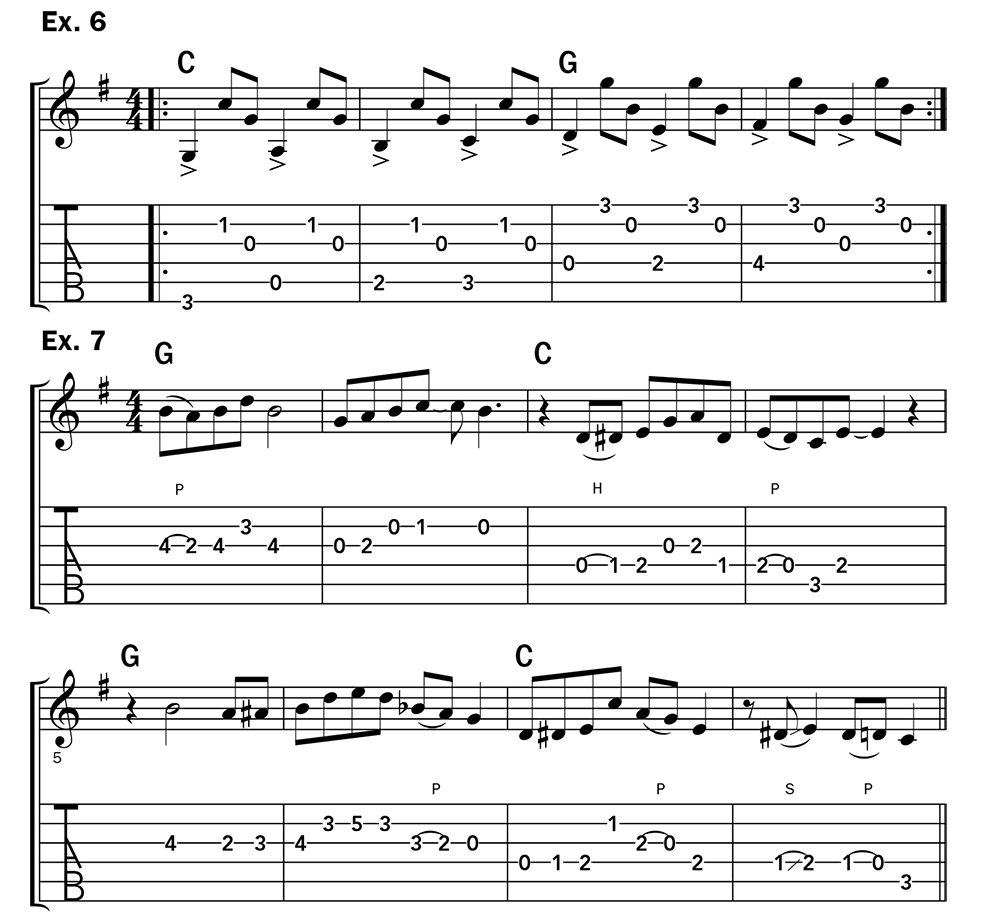 In the instrumental chorus of “Friend of the Devil,” Garcia and Grisman play lead lines simultaneously; Garcia plays in a style indebted to bluegrass flatpicking legends Doc Watson and Clarence White, both of whom influenced Garcia’s acoustic playing. In Ex. 7, just as in Examples 2 and 3, you’ll find chromatic notes that lend spice to the music. There are some fretting-hand shifts to be aware of here, too. While the example is largely in open position, it starts off in second (play the notes in measure 1 on frets two, three, and four with your index, ring, and middle fingers, respectively) and climbs back up there in measure 5.

Notice also that this example is not crammed full of eighth notes. If you listen to the original recording, you’ll hear how Garcia creates gaps in his solo, so as not to overwhelm Grisman—a good lesson in musical generosity.

“Ripple,” also from American Beauty, features some rootsy chord work from Garcia in a sort of embellished-chord approach he often used on acoustic guitar. Play through the figure in Ex. 8, letting everything ring as long as possible. Add emphasis to the melody notes, which tend to fall in the odd measures, without playing them too forcefully. If you like, try substituting G and C chords in place of Em and Am. 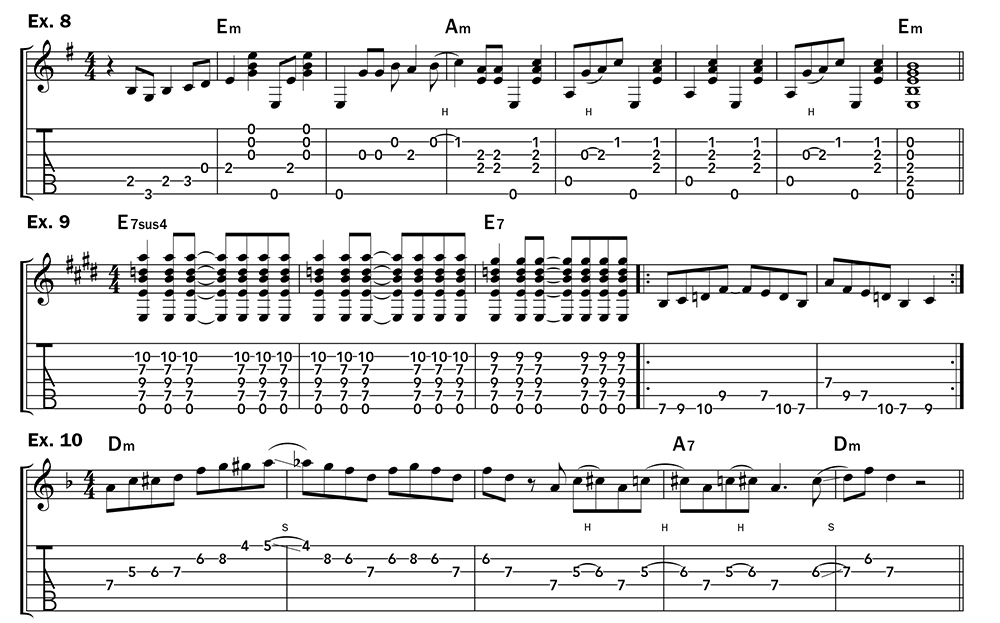 JAZZY STRAINS
Due to the improvisatory nature of Garcia’s approach, it should come as no surprise that jazz—a style born of spontaneity—often figured in his playing. “Bird Song,” which Garcia first recorded on his 1972 solo debut,Garcia, and which was long part of the Grateful Dead’s set lists, was influenced by the modal jazz that trumpeter Miles Davis pioneered in the 1950s. In fact, in 1993 Garcia, along with David Grisman, recorded  several versions of Davis’ most well-known modal number, “So What,” and also performed it live at a few shows.

One of the most salient features of modal jazz is harmonic stasis, and in the verse of “Bird Song,” Garcia hangs out on D7-type chords for long stretches at a time, between vocal phrases, adding licks from the D Mixolydian mode (D E F# G A B C). Ex. 9 shows a similar approach based on the E Mixolydian mode (E F# G# A B C# D). Fret the E7sus4 and E chords with a partial barre at the seventh fret and your ring and little fingers, respectively, on strings two and four; play the single-note lick with your index, ring, and little fingers on the seventh, ninth, and tenth frets.

Garcia worked with saxophonist Ornette Coleman on the free-jazz pioneer’s 1988 album Virgin Beauty, but he was also drawn to earlier expressions of jazz, which is evident on the albums he recorded with Grisman in the early 1990s. “Grateful Dawg,” from the duo’s self-titled 1991 debut, sounds in places as if it could have been written during the swing era. On this peppy number in the key of A minor, Garcia demonstrates his fluidity in a more traditional jazz context. Ex. 10 is inspired by Garcia’s improvisations on “Grateful Dawg.” The first three measures are based around the D-minor pentatonic scale (D F G A C), dressed up with choice chromatic notes—C# and G#—in measure 1. The second half of measure 3 anticipates the A7 chord in measure 4, flirting with both the major and minor thirds of the chord (C#] and C before landing squarely on the major third on the downbeat of measure 4. The major third is also seen in measure 4 on the and of the fourth beat, where it leads smoothly up to the D note in the last measure. Be sure to play the example using alternate picking, taking things slowly at first and stopping to hear how the notes relate to the chord changes—something that Garcia, in his wide-ranging and thoughtful style, was keenly aware of. While Ex. 10, like all of the other examples, offers a small étude on a particular strain of American music, it also demonstrates the way Garcia used familiar sources to create his own idiosyncratic voice on the acoustic guitar.