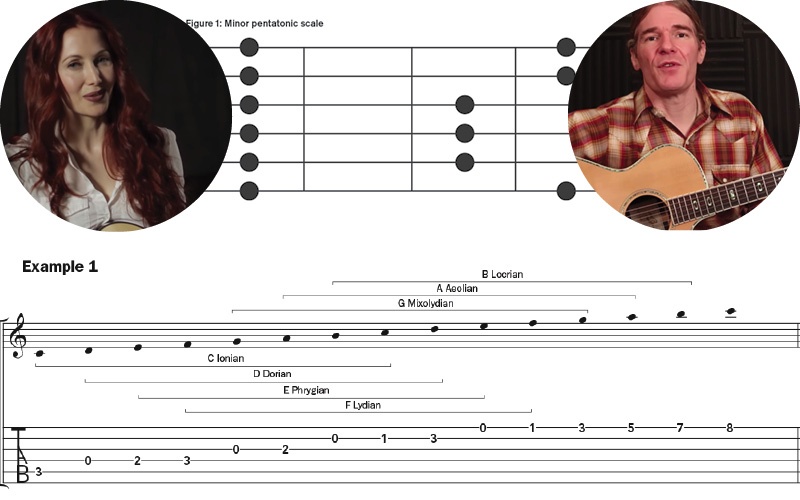 How to Use Modes and Pentatonic Scales on Guitar

Using different modes and scales can make the same set of notes and rearrange them to sound like they’re from a completely different world. Modes change the order in which the notes are played, and one scale in particular—the pentatonic scale—leaves out a couple key notes to change the feel of a tune. Here are some tips to get started on understanding the power of modes and pentatonic scales (major and minor), and how to fit them into your own playing on acoustic guitar.

Within the major scale you can find seven different modes, each with its own distinctive sonic identity. For example, the C major scale modes written in two octaves are Ionian (from C to C), Dorian (D to D), Phrygian, (E to E), Lydian (F to F), Mixolydian (G to G), Aeolian (A to A) and Locrian (B to B).

Although these seven modes share the same seven notes, each sounds quite different because every mode begins on a different degree of the scale. Ionian, Lydian, and Mixolydian sound major, while Dorian, Phrygian, and Aeolian sound minor; Locrian sounds diminished. Also, Dorian is often described as “jazzy,” Phrygian as “Spanish,” Mixolydian as “bluesy,” and so on.

Here are some examples of modal songs:

Guitarist Tim Bertsch takes the confusion out of learning these reorderings of the major scale, with their Greek names, in this Weekly Workout article. For example, one exercise is a passage from “Scarborough Fair,” an English folk song that was also a hit for Simon & Garfunkel. The tune is in the key of A minor, and though most of the melody is drawn from the A natural minor scale (A B C D E F G), in bar 7, the appearance of the raised sixth (F#) suggests the A Dorian mode (A B C D E F# G).

You may have noticed that deleting these scale degrees also does away with half steps, or minor seconds (e.g., from E to F, B to C, etc.). The absence of this most tense interval helps give the pentatonic scale its characteristic sound. You’re left with whole steps and minor thirds (the distance of a whole step plus a half step). The formula for the major pentatonic scale is W-W-m3-W-m3 and that for the minor pentatonic is m3-W-W-m3-W.

The pentatonic scale is everywhere. Its characteristic sound is useful in a wide variety of genres. Yet one particular shape of the pentatonic is far and away the favorite among guitar players. To dive more deeply into pentatonic scales, check out this video lesson by Gretchen Menn. Even if you’ve never played a pentatonic scale before, this will help you understand and implement it up and down the fretboard.

The minor pentatonic scale is most often used in bluesy contexts, but it does have plenty of other applications. When you want to play a bluesy solo, find a song’s root note on the first string and build your blues box there. If it sucks, just take it down three frets and it will work. This tip will allow you not to just play bluesy solos but to actually use that versatile minor pentatonic scale/blues box in almost any situation, as Fred Sokolow demonstrates in this lesson.

To learn more about scales and other music fundamentals, see Gretchen Menn’s The Way Music Works, available at store.acousticguitar.com.