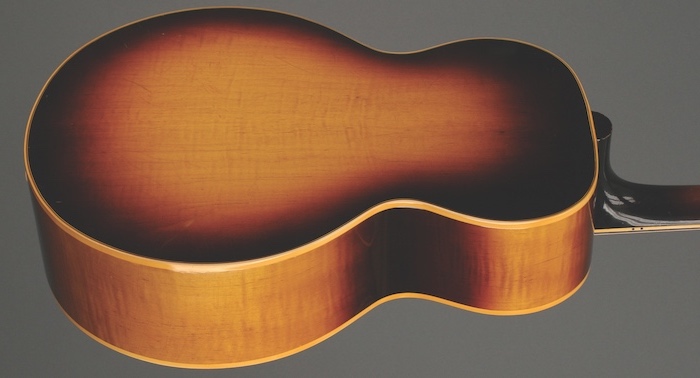 Guitar Guru: Do the Tonewoods and Thickness of My Guitar’s Back Have an Impact on its Sound?

Q: “I noticed that some guitars have very stiff backs and there is no difference to the sound whether the back is held against your body or away from it. What are the advantages of stiff vs. active backs?”—Seth Brockman, Tulsa, Oklahoma

A: To understand how backs function, look first to how an acoustic guitar produces sound. In simplest terms, a stringed instrument is a series of coupled oscillators. Oscillation, or vibration, begins at the strings, which are coupled by a bridge to a diaphragm, otherwise known as a top. A vibrating diaphragm “shakes” air molecules inside a partly enclosed body, sending sound pressure waves through air outside the instrument.

Strings produce an array of frequencies. Frequency strength is selectively modified at each coupling stage. For example, one top favors frequencies according to algorithms determined by the weight and stiffness of an individual piece of spruce, it’s thickness, and how it’s braced, while another top employs different algorithms. The same can be said of bridges, which employ algorithms defined by size and material, and of air enclosures, whose algorithms are determined by volume, shape, port size, and so on.

So far, this model consists of algorithmically coupled strings, top, and enclosed air, all linked to create sound pressure waves outside the instrument. Complicating this picture, vibrations from the top, enclosed air, and the neck excite the back to vibrate according to its own algorithms. Like the top, a vibrating back influences air oscillations inside the enclosure, adding color to the overall sound. The back of an acoustic guitar therefore functions both as a member of an enclosure and also as a secondary soundboard.

As a general proposition, stiff-backed guitars “rob” less vibrational energy from the sources that excite it, allowing more direct and efficient couplings between the top/bridge/air cavity and resulting in enhanced volume and projection. A stiffer back functions minimally as a secondary soundboard, contributing less tonal coloration to the instrument’s overall voice. While differences between mahogany and rosewood might be readily discernible, subtle distinctions between similar woods, such as varieties of rosewood, may be less pronounced. Some makers of classical guitars, whose braced backs are stiffer than those of most steel-strings, play down differences between Brazilian and East Indian rosewoods, occasionally inciting accusations of heresy from the steel-string crowd.

Lighter backs can add vibrancy, complexity, and coloration to a guitar’s sound, though at the expense of power and volume. Tonal advantage, however, may depend somewhat on playing technique: If held too tightly against the body, a lightly braced back will not oscillate freely. Nevertheless, pre-war–through–’50s Gibson acoustics, whose backs are built much more lightly than their Martin counterparts, are currently enjoying a spike of popularity among some of my favorite guitarists. Owing, in part, to the tonal contributions of their backs, the best of these guitars can be more harmonically saturated, though quieter, than characteristically dryer, but more powerful Martins from the same period. Happily, players can afford to be less concerned with volume and power in this age of high-fidelity sound reinforcement.

Dana Bourgeois is a master luthier and the founder of Bourgeois Guitars. This article appeared originally in the January 2016 issue of Acoustic Guitar magazine.