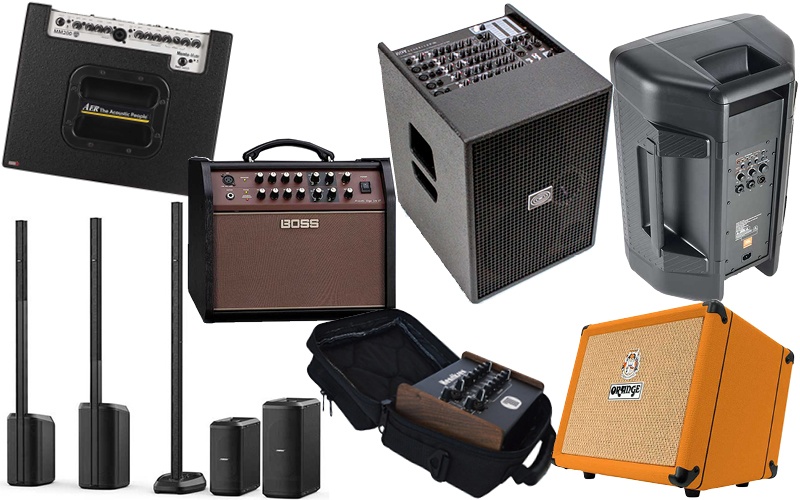 Guitar Amps and PA Systems for the Acoustic Guitarist

Not every guitar amp is made with the acoustic guitar in mind. While the market has always been flooded with amps made for electric guitarists, plugging a dreadnought into one never quite worked even for acoustics with the best pickup systems. But the past couple decades has seen a sea change in amplification technology and sound quality, and the last couple years has been especially fruitful for those looking for an acoustic guitar amp.

Here’s a quick guide with links to each amplifier mentioned:

Monte Montgomery fans will recognize the AER MM200 guitar amp as the workhorse through which the boundary-pushing guitarist channels his acoustic-electric mischief and mayhem. No wonder, too—it’s small, lightweight, powerful (200 watts!) and easy to use, with controls (3-band EQ, color button, reverb, delay, chorus) logically laid out on the top panel. It’s got a big, full tone that brings out the best in acoustic guitars through an amp. The smaller AER Compact 60 shares the same design features, but doesn’t have that full Monte muscle. Still, it sounds bigger than it looks and gets plenty loud.

Boss is known for a seemingly endless array of guitar pedals, from subtle tone boosters to warped spacetime tunnels, so it makes sense then that when they make an amp it’s going to have a lot of features. The Boss Acoustic Singer Live LT is no exception. This 60-watt, lightweight guitar amp balances simplicity, minimalism and good aesthetics with a generous bounty of features including audio flexibility (USB recording and a Mix/DI output), dual mic/guitar channels, effects, EQ, and other tone enhancers. Part of the fun with this amp is having ultimate control over the output—you can use the back-panel XLR/DI output and the 1/4-inch recording/phones output to send signal to a house PA, while retaining the the Acoustic Singer Live LT’s great tone shaping, effects, and preamp qualities. And you can use the USB output to record your performances direct to a computer or smart device while also retaining control over EQ, effects, and overall sonics the way you dictate.

Colorado-based Henriksen made a splash in the acoustic guitar world when it released The Bud, a 13-pound, 120-watt combo amp that offered a flat response, high quality speakers, and a powerful, five-band EQ. Building on that success is Henriksen’s The Bud Head, which, as you may have guessed, is a head-only version of The Bud. This two-channel unit is small enough to be mounted on a large pedalboard, but powerful enough at 120 watts to plug into a large speaker cabinet (or two, as it features two speaker outputs) and be loud enough for nearly any venue. In addition to volume, it offers audiophile quality sound that shines both live and in studio sessions. Fingerstyle and flatpicking acoustic guitar playing both sound great through this amp; chords sparkle with clarity and don’t get lost in the woofiness common among guitar amps, whether going direct into the head or coming from another preamp.

One of the best things about Orange amps is that you can play just about any style of music through them and they sound great. The Orange Crush Acoustic 30 is the company’s second foray into the acoustic amp world. It provides a focused, nicely voiced sound with two inputs (one instrument and one combo), multiple EQ knobs, and reverb or chorus effects. It can also run on battery power (10 AA batteries), so you can crank it up literally anywhere. The 3.5mm aux input allows you to play along to backing tracks, which makes it perfect for busking or coffeeshop gigs. While it doesn’t quite get loud enough to use as a standalone amp for a medium-sized gig, it has a DI out that can be plugged into the house sound while still allowing you to use the amp as a personal monitor.

In the world of acoustic guitar amplifiers that double as miniature PA systems, the Schlertler Roy guitar amp is king—in this case, literally, as the Swiss amp maker has named this beauty after an anglicization of Roi, French for “king.” This 7-channel Swiss-Army knife of an amp (couldn’t resist) more than held its own with a Babicz Identity acoustic guitar, a Fishman-equipped Lanikai ukulele, a 1980’s Carvin bass, and a Neumann TLM 127 microphone (on vocals and other acoustic instruments) during testing for a review. The top panel is a real showstopper, with a dazzling array of jacks, knobs, buttons, and effects matrix. It delivers a big, full sound with its Class-A preamp, and a handy resonance switch helps abate feedback in the low end when it’s cranked up.

The idea behind the Bose L1 when it was introduced in 2003 was to be able to place a speaker behind the performer, so the audience and performer would be able to hear the same thing. Acoustic performers especially embraced the original L1 due to its ability to fill a room while offering portability and simplicity. The Bose L1 Pro Series updates the original design with Bluetooth connectivity, extended bass range and overall sound dispersal (180 degrees), more input and output options, an app to mix from your smart device, and an EQ preset selection it calls ToneMatch. The Bose L1 Pro 16 is loud enough with its 250-watt speaker column and 1,000-watt subwoofer to cover a medium-sized room for a gig. It’s also compact and light enough to carry into a gig with your guitar in one trip. It offers a clear sound that’s actually enjoyable to play acoustic guitar through—something that is often lost in the hubbub of a live setting.

The JBL IRX112BT Powered PA is an affordable alternative to a traditional guitar amplifier that can handle two inputs—handy for singer/songwriters or two instrumentalists looking to jam. The fact that it is Bluetooth-enabled allows for music to be streamed from a phone or tablet during or between sets. It sounds clean with plenty of low-end, and you can still run your guitar through a preamp first to enhance the tone if you like. At 1,300-watts of peak power, it has plenty of oomph to be able to handle an acoustic performance in a medium-sized venue. It can be mounted on a speaker stand or placed on the floor on flat or angled configuration.