Gear Review: Gold Tone’s F-6 Mando-Guitar Makes it Easy for a Guitarist to Sound Like a Mandolinist

Gold Tone Musical Instruments, headquartered in Titusville, Florida, has reintroduced the F-6 Mando-Guitar. The 21-fret, short-scale acoustic instrument utilizes standard guitar tuning but is pitched up a full octave, which produces the timbre and character of a mandolin. Boasting a new, wider slim-line neck and a longer scale than its predecessor, the new F-6 promises a little more room to move, as well as a comfortable playing experience, all at an affordable price.

The distant ancestor of the mando-guitar is an 18th-century Italian instrument from the lute family known as the mandolino alla Genovese or Genoese mandolin. This very small bowl-backed instrument featured double courses of strings like a contemporary mandolin, but had six sets of double courses (12 strings) and was tuned as a standard guitar is today. Although regionally popular in Italy through the 19th century, the instrument eventually fell into obscurity.

Surprisingly, when the early 20th century mandolin craze swept across the United States, this particular mandolin variant was not revived. However, in 1965, instrument manufacturer Vox introduced the first true mando-guitar, an electric instrument more closely related to a 12-string guitar, designed to capitalize on the emerging folk-rock trend. Gimmickry aside, it found favor among studio musicians even if debate continues to this day about which famous pop records feature its distinctive jangle.

Gold Tone’s F-6 is a reimagination of the older mando-guitar. With a mandola-sized body inspired by Lloyd Loar’s famous American flat-back with f-hole design, the F-6 offers the player an alternate history that shares the aesthetics and sonic characteristics of the mandolin family of instruments that were produced in Kalamazoo during the early 1920s.

The F-6 is made in China to Gold Tone’s specifications and is set up in its Florida facility before shipping. It features a solid spruce top with maple back and sides, all with a satin finish. Website specs mention both ebony and walnut bridges, but the latter appears to come standard. Finished off with a chrome-plated trapeze bridge, the mando-guitar easily accommodates standard, albeit very light, guitar strings (.008–.042). A raised fretboard allows for two-way truss rod adjustment.

Out of the box, the F-6 was remarkably ready for music making. Well-intonated and with a comfortable setup, all I had to do was bring the strings to pitch and start playing. The instrument’s craftsmanship is certainly more than competent and the build feels solid, even if some of the finishing touches, such as the binding, lean towards rough-hewn. But considering Gold Tone’s stated goal of offering the highest quality at the fairest price possible, the $580 (street) instrument is definitely a good value.

The reviewed example took little time to open up, and I was able to coax a very pleasant woody sound out of it with relative ease. A quick inspection revealed parallel bracing under the spruce soundboard, which perhaps explained its impressive volume. The manufacturer also touts the benefits of the body’s larger air chamber to aid in low-end response. But most impressive was the general timbre of the instrument: rich, balanced, and lively.

Coming from a standard guitar, the F-6 presented some initial challenges in terms of getting accustomed to its compact dimensions. The bone nut isn’t quite as wide as is specified on the website—at least not on the review model—and with a scale length of just 15 inches, every bit of real estate counts. But it ultimately required little transition time to adjust my chops to the mando-guitar.

It’s intriguing, if not fun, how the sound and feel of a different-sized and pitched instrument can have a direct impact on one’s approach. I was immediately enticed into playing Romantic, tremolo-laden lines with a Mediterranean flair. My fingers started searching out those bluegrass lines buried somewhere back there. Both full-size folk chords and three-to-four-note jazz voicings seem to be at home on this diminutive box, hinting at its versatility. And of course, pop material works quite well on the mando-guitar, echoing the novelty of ukulele but offering up more familiar musical terrain.

The instrument amplified moderately well through an AER Compact 60 amp, the piezo preserving most of the acoustic sound of the instrument at lower volumes. However, the satisfaction decreased as the volume increased, which suggests potential challenges using the instrument in a live setting without modifications. I could not resist also plugging the F-6 into a 1936 Gibson EH-150 tube amp and reeling off a few licks à la Tiny Moore, who played electric mandolin with Bob Wills and the Texas Playboys in the 1940s. Tonally, the experiment wasn’t altogether satisfying, although Gold Tone does offer a solidbody electric version of this instrument for non-acoustic string players.

After I spent some time getting to know the F-6, questions inevitably arose: Where might this instrument fit into a string player’s stable and to whom would it most appeal? The mando-guitar replaces neither the mandolin nor the guitar but will likely appeal more to those familiar with the latter. To a professional guitarist and very amateur mandolinist such as this reviewer, the hybrid affords the luxury of dispensing with the need for a working knowledge of another tuning and technique. That said, a little mandolin technique goes a long way here, particularly if one is looking to use it as a substitute or alternative for that smaller instrument, either in a recording setting or jam session. Pitched in between its two parent instruments, the F-6 has a range intriguingly close to that of a tenor banjo. It sits nicely on top of a guitar while still allowing plenty of headroom for a fiddle or proper mandolin.

While the Gold Tone F-6 Mando-Guitar might not spark a nationwide revival of mandolin orchestras, it will inspire some players to start exploring the world of smaller plectrum string instruments. Guitarists who have fostered such interest will find the transition both technically easy and musically rewarding. Available at an affordable price point, Gold Tone’s retooling of the mando-guitar may also appeal to studio players looking for different textures regardless of the style of music they are creating. 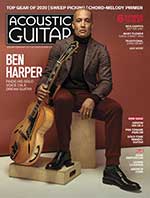 This article originally appeared in the January/February 2021 issue of Acoustic Guitar magazine.