Folk, Jazz, and Classical Meet in Woody Harris’ Return to Recording on ‘Bluish’ and ‘Edgework’

Following the death of Mike Bloomfield, two years after releasing Bloomfield/Harris (1979), Woody Harris returned to classical music full-time, completing degrees in composition and musicology and taking a job editing piano scores by Claude Debussy, César Franck, and Maurice Ravel. Now, with the EPs Bluish and Edgework, he’s released his first new music in 42 years, and it’s a lifetime away from the folk albums he recorded in his twenties.

Of the two, the five-song Edgework feels furthest from American Guitar Solos, the 1976 debut that landed Harris in the first generation of American Primitives. It’s much less linear, and as part of his attempt to reduce “musical language to bare essentials,” there’s little sustained melody, harmony, or rhythm. Pieces like “The Drop” and “Nearly Burned,” barely longer than three minutes each, exist primarily as abstractions, as etudes to explore the movement of notes that rise and fall, smartly punctuated by skeletal chords.

That makes the six-song Bluish sound positively colorful, full of tension and release, and grounded in the more familiar comforts of French Impressionism and American jazz. The influences on both EPs—Debussy, for sure, along with Bill Evans—are the same, but the emotional content on tracks like “Driftin’ on By” and “Rock Friday” make Bluish feel like a different world, caught in a twilight of sadness and regret. It’s here that Harris’ playing is at its fullest and most dynamic; a perfect meeting place of folk, jazz, and classical. 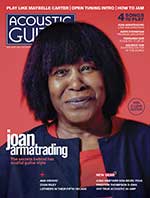