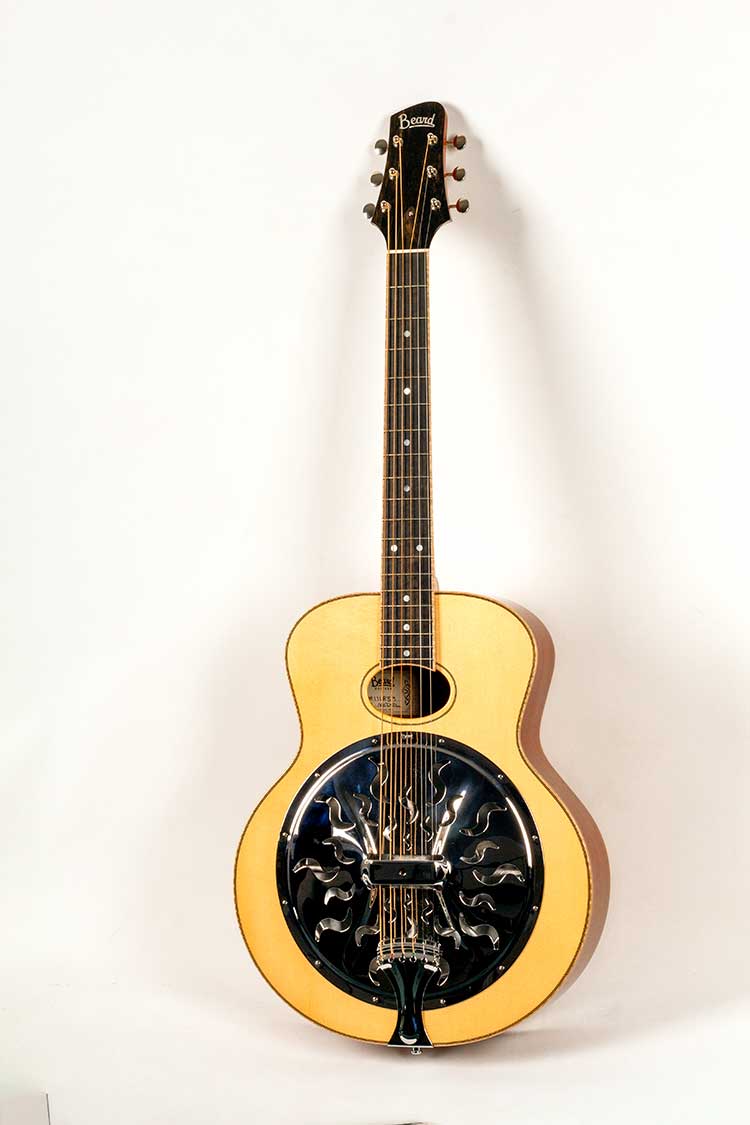 Beyond Flattops: The Magic of Resonator Guitars

David LustermanMarch 6, 2020
This article is free to read, but it isn't free to produce! Make a pledge to support the site (and get special perks in return.) LEARN MORE...

The quest for loud guitars came long before Les Paul, Leo Fender, and a host of other innovators developed workable electric guitars and amplification. As the relatively quiet and small-bodied guitars of the 19th century left the small, genteel parlors of homes for larger public spaces, they needed to become louder to accompany violin, piano, or brass instruments. This resulted in the guitar being transformed from the refined, delicate instrument still tied to a European model to one more stereotypically American—big and loud. As the 20th century began to ramp up, several American makers began fundamentally changing the guitar to meet the needs of the players who wanted to be heard on a bandstand, juke joint, or busy downtown sidewalk.

In this arms race for more volume and presence, guitar makers began building larger and larger instruments and experimenting with different construction concepts, like new bracing systems and mechanical amplification. Out of all these innovations, the resonator guitar stands out for its solution of using a spun aluminum cone (or cones) to turn a player’s picking energy into ear-tingling music.

During the last two decades, the resonator has seen a reawakening, with instruments becoming more affordable through overseas mass production, and at the same time more innovative, as smaller builders continue to refine the basic concept that’s nearly 100 years old.

For anyone familiar with the gutsy chime of a shiny, nickel-plated National or the lonesome wail of a Dobro, it’s almost hard to imagine how radical these guitars were when they were new. The sound of a guitar relied on a vibrating wooden box to produce sound, but all of that changed in the late 1920s, when a Slovak-born luthier named John Dopyera was tasked by an American guitarist, George Beauchamp, to create a guitar loud enough to play melodic parts on the bandstand.

As an inventor who already had a few patents to his name, Dopyera devised a way to make the guitar louder using three very thin aluminum cones, driven by the strings vibrating a T-shaped bridge. The cones operate nearly identically to the speaker cones in your home stereo or guitar amp, though they face the back of the guitar and their sound is reflected off the rear. In 1927, the success of this instrument led Dopyera, Beauchamp, Dopyera’s two brothers—Rudy and Emil—and a group of investors to form the National String Instrument Corporation in Los Angeles. The dramatic story of the invention and the contentious aftermath is covered in great depth in Bob Brozman’s The History and Artistry of National Resonator Instruments (Centerstream) and is a worthy read for anyone interested in learning more.

These first three-coned instruments were called tricones, and they immediately caught on with the Hawaiian guitarists that were very popular in this era, like Sol Hoopii. The tone of these guitars could be almost liquid, with complex overtones, a reverberating quality, and a lot of sustain. The instruments found favor with players as diverse as Tampa Red, who played his singular slide guitar parts on an elaborately engraved gold-plated Style 4, and the criminally overlooked Oscar Alemán, who played fingerstyle with a thumbpick and recorded a handful of breathtaking recordings on a National Style 1. Alemán led the singer Josephine Baker’s band in prewar Paris and was widely considered Django Reinhardt’s main competition until he fled the Nazis and returned to his native Argentina. As Michael Dregni writes in Greg Ruby’s Oscar Alemán Play-Along Songbook (here’s a video lesson to get you started), Aleman’s tricones “were deemed essential to the Nazi war efforts and were to be melted down to be made into weapons of war.”

In response to the Great Depression, National introduced a less complex design that was more cost-effective to build. These more affordable guitars used one large cone, with a small bridge attached to the top of the cone, called a biscuit. Single-cone, or biscuit-style, resonators became the most popular design among country, folk, blues, and gospel musicians, who found ways to capitalize on the instrument’s strong attack, ideally suited for styles like Piedmont blues and ragtime. The list of players who used single-cone Nationals is as diverse as it is long and includes such greats as Sister Rosetta Tharpe, Blind Boy Fuller, Booker “Bukka” White, Son House, Hawaiian guitarist King Bennie Nawahi, Scrapper Blackwell, and countless others.

The single-cone’s development caused a lot of internal friction at National, and Dopyera and his brothers left to form a new resonator company, Dobro. The name was a clever one, incorporating Dopyera, while nodding to the brothers’ native tongue with a word that means “good” in Slovakian (dobrý).

The Dobro and National systems share the same basic idea—using a metal resonator to amplify the guitar’s tone—but with one very important difference. Instead of reflecting the cone’s sound off of the back of the guitar, the new Dobro design used a cone that faced outward, away from the guitar, which called for a web-like bridge to power the instrument’s cone. A spider bridge, as the design came to be known, produces a sweeter and more sustaining sound than a biscuit-style resonator, but not as rich as a tricone. Spider bridges found favor first with country and later with bluegrass musicians.

The rise of the electric guitar and the onset of World War II effectively ended production of resonator guitars, though they remained popular with artists who continued to make music with them until interest in their unique tones again began building in the 1980s.

Because the resonator is a niche instrument in the acoustic-guitar world, many of today’s makers tend to be specialists who make this instrument type exclusively. The market is quite specialized, too, which allows it to be nimble, with many unique and exotic variations on the resonator theme being produced by small custom builders and larger factory makers alike.

The allure of a vintage guitar is undeniable, and classic Dobros and Nationals are relatively affordable. But in most cases, modern resonators are more playable and sonically on par with—or even better-sounding than—the earliest examples, which often suffer from poor intonation (at least on the round-neck models) and inconsistent manufacturing techniques, not to mention the ravaging effects of time. Many of today’s builders use CNC machinery to create necks and bodies with far greater precision than was possible decades ago, resulting in guitars that play more in-tune and are consistent from instrument to instrument.

National Guitars, which was founded in 1989 and is based in San Luis Obispo, California, is a leader in integrating modern construction aids like CNC with the considerable amount of handwork that goes into soldering brass, steel, and German-silver bodies together or creating wooden guitars. The company has not only recreated many of the most desirable vintage models, it has improved on the resonator’s usability, while offering unique finishes and decoration that have helped redefine what the instrument can be. And having recently acquired the revered Scheerhorn brand of spider-cone guitars, National now offers dobro-type models. Prices for these American-made guitars begin at $3,100 (MSRP) and go up quickly with different finish, body material, and electronics options.

Just like steel-string acoustic players, resonator guitarists often crave unique instruments, which leads some of them to turn to smaller makers for custom pieces. You can find high-quality boutique resonators from John Morton, Mule, Ron Phillips, and Trussart, among other U.S. builders. Likewise, several smaller makers focus on dobro-style guitars, with companies like Beard producing what are arguably the finest examples in the resonator guitar’s history.

Players looking to spend less than $1,000 on a new or used resonator guitar have many options to choose from in spider- and biscuit-type resonators. The resonator scene is dominated by instruments made in China and sold in the U.S. under several familiar brands. In this price range, you’ll find some with historic allegiances, like Dobro, Regal, and Gretsch, as well as other legacy companies—Dean, Recording King, and Washburn—that didn’t have resonators back in the day, but now offer a mouth-watering buffet of options to choose from at prices not possible in American-made guitars. Other relative newcomers, like Republic and Royall, are making waves with unique models that summon modern aesthetics, like steampunk.

Most resonator designs fall into the two traditional choices—a steel-, brass-, or wood-bodied biscuit-style modeled after a National, or a wooden Dobro-type guitar. Still, like the higher-end instruments, these more affordable options may offer more cutaways, electronics, and slimmer necks, to appeal to today’s guitarists who may have rootsy sounds in their ears yet want modern playability. Regardless of your budget, there is something out there that can satisfy your musical cravings for the unique sounds of a resonator guitar.

Shop for resonator guitars with these online retailers.

Learn the Fundamentals of Flatpicking on Guitar