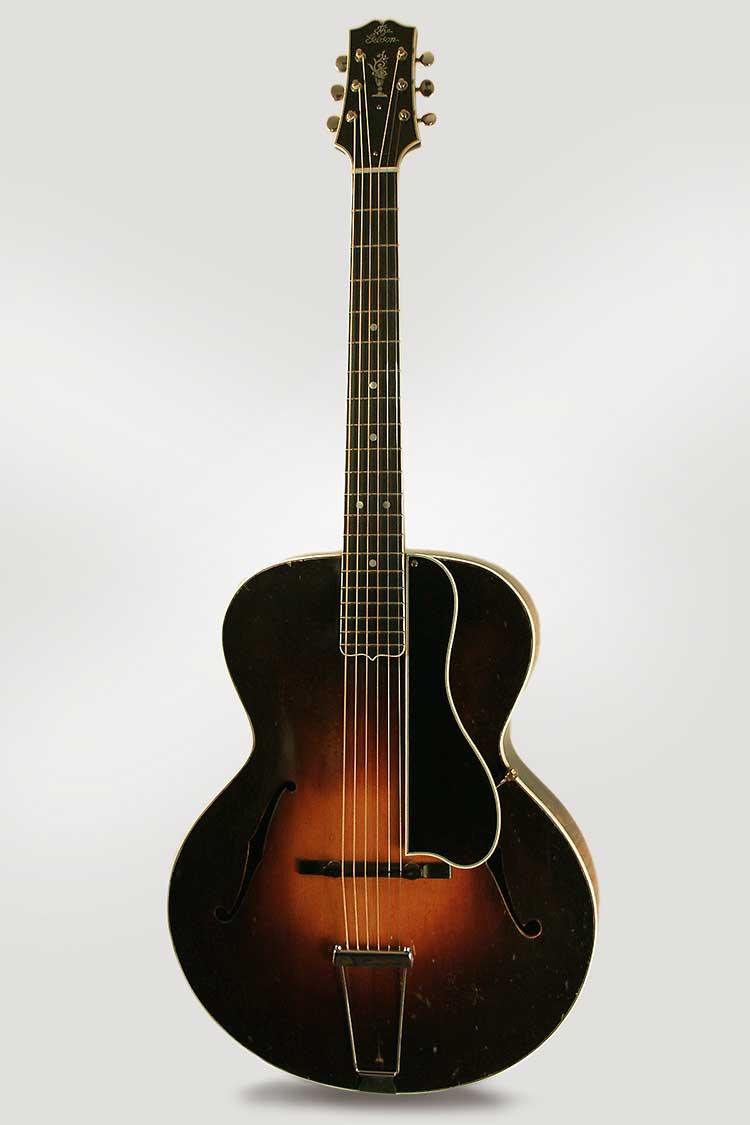 Beyond Flattops: The Magic of Archtop Guitars

Though long favored by jazz and swing guitarists, the archtop is currently enjoying a revival among roots and Americana musicians, flatpickers, and singer-songwriters looking to expand their textural palettes. Archtops also enjoy a fan base of passionate enthusiasts and collectors, who seek out vintage examples as well as contemporary designs by modern luthiers.

Many different types of guitars fall under the archtop designation, but whether fully or semi- acoustic, and with or without electronics, they share distinguishing traits. An archtop’s soundboard is carved from a single hunk of wood (usually composed of two pieces that are book-matched and joined together), with the top arched upward away from the back and sides, as on a violin. The back is often carved in a similar manner, but some archtops have flat backs. Archtop soundboards are typically constructed of spruce; the backs and sides are maple or, less commonly, mahogany, walnut, or other tonewoods. An acoustic archtop borrows other features from the violin family, including opposite-facing f-holes (though some archtops have more traditional soundholes instead), a floating bridge, and a rear-mounted tailpiece.

The design of the modern archtop is most commonly attributed to the luthier Orville Gibson. In 1898, Gibson applied for a patent for a mandolin and guitar design, intended to utilize the aforementioned features to enhance “power and quality of tone.” Early Gibson archtops, like Gibson’s L-1 and Style O, featured round or oval soundholes. The year 1923 saw the release of Gibson’s first Master Line L-5 Professional Model, which would become the benchmark for all archtop makers. While the L-5 shared some characteristics with previous models, like a 16-inch lower bout and an adjustable bridge (a feature first seen on Gibson mandolins in 1921), it sported some bold new elements: a pair of parallel tone bars for soundboard bracing, f-holes, and an elevated fingerboard. It should be noted that while the L-5 is often credited to Gibson’s “acoustic engineer,” Lloyd Loar, who signed the labels of the earliest examples, his role in the instrument’s design and construction has in fact been called into question as marketing hyperbole.

The L-5 was almost an afterthought in a quartet of Gibson offerings that also included the F-5 mandolin, the H-5 mandola, and the K-5 mandocello. And despite its powerful tone and pristine appearance, the guitar wasn’t an immediate success. Few musicians could afford an L-5, which originally cost $275, plus about $40 for a case (around $4,700 in today’s money for both). Compare that to the price of a Ford Model T ($265 in 1924)—or the fact that during the Great Depression many laborers earned just a dollar for a day’s work. But thanks in large part to jazz star Eddie Lang, the L-5 developed a formidable reputation. At the same time, in 1928, the country pioneer Maybelle Carter used earnings from her first recordings to purchase the brand-new L-5 that she played for the rest of her career.

Before the advent of amplification, country and jazz guitarists needed acoustic instruments that could be heard as clearly as banjos, fiddles, horns, and drums. In 1934, Gibson introduced the Super 400 model, with its 18-inch lower bout. Throughout the ’30s, other makers, competing for the attention of big-band guitarists, also produced larger and louder archtops—Epiphone’s 18-1/2-inch Emperor being a prime example. The Boston-based luthier Elmer Stromberg went even bigger with the stunning Master 400, which featured a 19-inch lower bout and a single diagonal top brace. Legendary jazz guitarist Freddie Green favored Strombergs throughout his long tenure with the Count Basie Orchestra.

Made in New York

John D’Angelico, who opened a shop in New York City in 1932, was one of the most influential individual luthiers associated with the archtop. His New Yorker and Excel models are among the most sought-after examples by players and collectors alike. D’Angelico, sometimes with the help of his assistant, Vincent “Jimmy” DiSerio, built over 1,000 instruments—all by hand. D’Angelico’s archtop guitars, most of them custom orders, became the instruments of choice for New York’s jazz and studio elite, such as Johnny Smith, Chuck Wayne, and Billy Bauer.

In 1952, D’Angelico took on a young apprentice named James D’Aquisto, who would become a highly influential luthier in his own right. Cristian Mirabella, an innovative luthier and restoration specialist based in Saint James, New York, also had the opportunity to apprentice with D’Aquisto and shares this perspective: “The flow of the archtop is so appealing—the seemingly soft, yet bold and strong lines that define the instrument’s shape and contours. It is the most versatile of all styles of guitar construction and is truly the most challenging to build. It forces you to have an intimate relationship with the wood, because it’s your knowledge of how to carve that piece of wood that’s going to bring out the sound. Its abilities are as diverse as the players who choose to pick it up.”

The acoustic archtop’s stature began to diminish in the 1950s, as guitarists in increasing numbers turned to electric instruments. But the 1990s witnessed a resurgence of the archtop’s popularity with players, collectors, and luthiers, many of whom were inspired by luthier Robert Benedetto’s landmark book, Making an Archtop Guitar. In 1995, noted collector Scott Chinery, inspired by the exquisite finish on his D’Aquisto Centura, commissioned the “Blue Guitar” project, in which a stellar group of traditional and modern luthiers built blue archtops. This project was documented in Ken Vose’s book Blue Guitar and serves as inspiration for many of today’s builders and their clients.

Fully acoustic archtop guitars have long been rarities among production models. But brands like Eastman and The Loar offer a range of very good examples at compelling prices. At the other end of the price spectrum, and built in very limited numbers, Collings offers hand-carved archtops like the AT 16 and AT 17, with 16- and 17-inch lower bouts, respectively. And Waterloo’s recent WL-AT model (reviewed in the September/October 2019 issue) takes its cue from budget 1930s Recording King models.

Contemporary acoustic guitarists of all styles are enjoying handmade, vintage, and production archtops in their quest for unique tone, style, and overall vibe. Tyler Wells, the luthier behind LHT Guitars, shares this perspective: “I think that archtops are becoming more popular with people who might not have traditionally gravitated toward them, such as fingerstyle guitarists and singer-songwriters. I’m an electric player, but I’m interested in building acoustic instruments; the archtop is the obvious intersection of those two worlds. If you combine the evolution of the instrument with the way guitar music has branched out and cross-pollinated between genres, I think more players than ever would find that the voice of the modern archtop really appeals to them.”

Shop for archtop guitars with these online retailers.